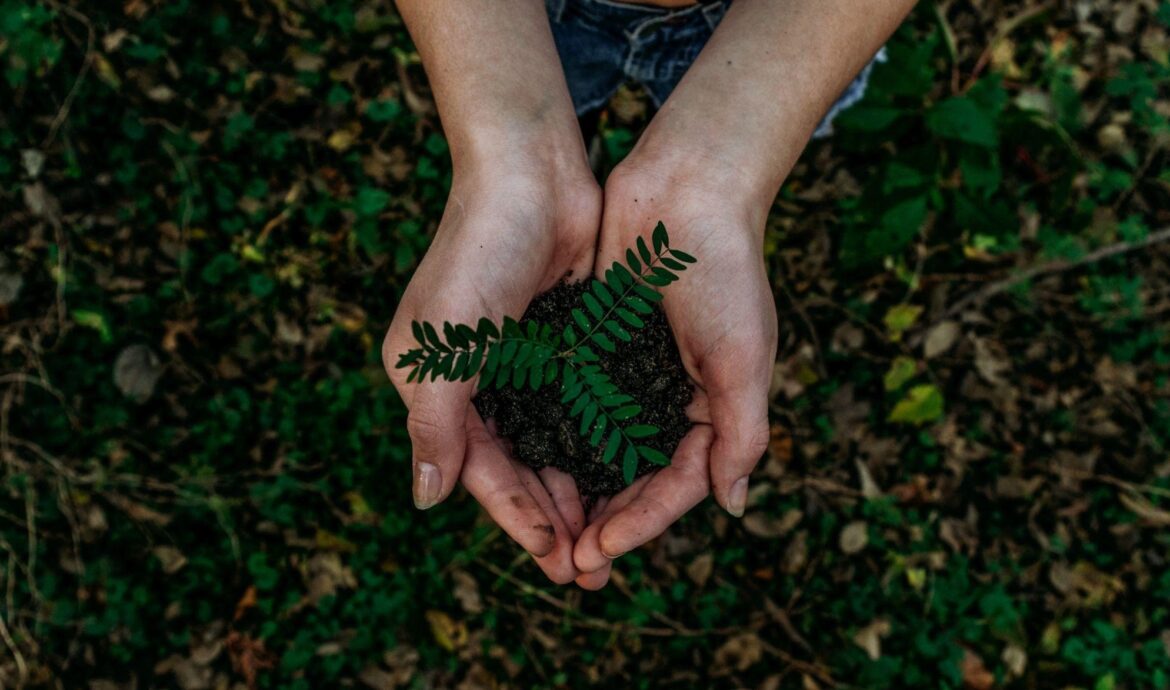 When SDGs conflict: Hydropower, people and the environment 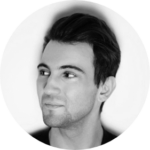 Fabian Hafner is a Master’s student at ETH majoring in Science, Technology and Policy with a focus on energy and mobility. He previously interned for the UN ESCAP at their subregional office for North and Central Asia and is currently working on a project around the Sustainable Development Goals with their Statistics Division.

The deployment of clean and sustainable energy is regarded as a pillar of sustainable global development according to the Sustainable Development Goals (SDGs). Counter-intuitively, this goal can sometimes directly interfere with other developmental objectives. Based on a working paper by UN ESCAP that quantifies interlinkages between renewable energy use and other indicators contained within the SDGs in North and Central Asia, I highlight one of the conflicts that arises within this development – hydropower (SDG7) vs. water access (SDG 6) and food security (SDG2).

The deployment of clean and sustainable energy has been identified as key to achieving sustainable global development and is measured explicitly within the United Nations Sustainable Development Goals (SDGs). The SDGs are a holistic framework of 17 economic, social, political and environmental goals that all UN member states pledged to follow for future development and are intended to be achieved by 2030. Renewable energy has been identified as key to enabling a  sustainable energy future, especially in the global fight against climate change. Depending on the context, integrating some climate change mitigation actions with development can be a complex task. For instance, hydropower (a clean energy source (SDG 7)) can be at odds with food security (SDG 2) and water access (SDG 6), as you will see in this blogpost. This presents a challenge to policymakers who want to pursue all SDGs simultaneously, and can have compounding effects on policy decisions, placing people, planet and profit in conflict with each other.

Hydropower has noticeable negative impacts on agriculture and water

A recent working paper published by UN ESCAP titled “Sustainable and clean energy in North and Central Asia” explores the relationship between renewable energy use and other indicators of the SDGs. To do so, we analysed data on renewable energy use and various social, economic, and environmental variables pertaining to the SDGs covering North and Central Asian countries over the last 20 years. The analysis comparing hydropower with the other variables showed some insightful findings that speak to potential conflicts between SDGs. Here’s what we learnt.

Many countries in  North and Central Asia, such as Armenia, Georgia, Kyrgyzstan, and Tajikistan, are heavily reliant on hydropower for their electricity supply. Consequently, they constitute an interesting case to study the effects of hydropower on other development factors. Using regression analysis on panel data covering countries in the region, we found statistically significant negative correlations between hydropower deployment and human malnourishment as well as safe water access. The regression analysis controlled for confounding various variables and fixed effects for countries and years, thus this negative correlation cannot be easily shown in a simple line graph but rather has to be understood in the context of the full scope of the regression (for more details check see the working paper here). A general inverse trend between safe water access and renewable energy use (mostly hydropower in those countries) can be extracted from the full analysis.

The graph below illustrates the relationship between percentage of the population with  access to safe water (dashed) and total renewable energy capacity installed (line) for different countries between 2000 – 2017. While at first sight, the graph seems to show hydropower might support safe water access, more in-depth analysis as performed in the paper using confounding variables gives actually a negative coefficient for their relationship, thus suggesting that this positive correlation should rather be understood as a spurious relationship. This outcome means that high deployment of hydropower can be counterproductive to safe water access and food security, and thus  highlights potential conflicts between these SDGs. For a full method and data description see the working paper. 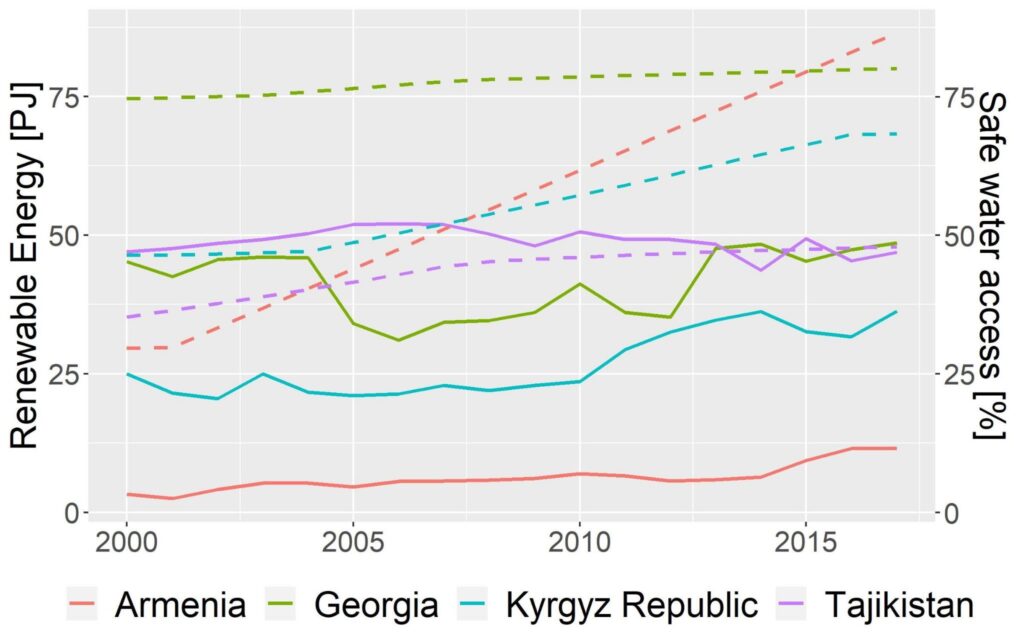 The discovered correlations between the SDGs are supported by observed events in hydropower deployment in the studied countries and can be extended to other nations and  transnational impacts. For example, in Georgia, hydropower projects have impacted the population of certain migrating fish, especially sturgeons, and thus affected not only the health of river ecosystems but also people relying on fish as a protein source. Furthermore, in Tajikistan farmers could only pump a limited amount of water to their fields in 2020 as low precipitation decreased the amount of available hydropower drastically. Looking beyond this region, similar trends regarding hydropower deployment have been observed in other countries. Another example is the massive development of run-of-river dams in the river Mekong flowing through Laos, causing displacement, sediment blockages and threats to the fish population. Elsewhere in the Balkans, it could be seen that even small hydropower plants can cause damage to nature reserves and syphoning off the water supply from villages. With thousands of hydropower plants planned around the world, the potential issues and conflicts around hydropower have to be considered carefully for future expansions and operations.

These conflicts may not be unique to hydro-power

The results from the statistical analysis indicate that hydropower in North and Central Asia might have negative impacts on water and food safety. Pursuing Goal 7 of the SDGs can thus counteract other goals, in this case ostensibly Goals 2 and 6. This demonstrated the need to explore potential conflicts that may arise between emerging energy technologies, the environment, society and the economy. This trend is not exclusive to hydropower and can be observed for other technologies as well, and even across borders. When looking beyond national borders, the development of renewable energy in one country can have adverse effects on sustainable development in other countries. For example, Sovacool highlights how decarbonisation efforts in the global north have resulted in unsustainable Cobalt mining in Congo and e-waste scrap yards in Ghana, which then led to the reinforcement of ecological destruction, gender inequality, child labour, and dispossession. Further, in neighbouring Armenia and Azerbaijan, the ability to control freshwater supply and water security via hydropower has been a recurrent source of conflict between these two countries since the fall of the Soviet Union.

This blog merely “scratches the surface”

This blogpost intends to highlight the nature of interconnections between SDGs, it particularly focuses on one case example which illustrates that following targets within the SDG framework efforts do not always have the desired effects or create equity problems.  It is therefore vital that multidisciplinary research efforts consider these questions in more depth, so as to identify some potential conflicting touchpoints that could possibly be addressed. Particularly through policy which may have long term effects on technologies which are deployed for climate change mitigation/adaptation and sustainable development.