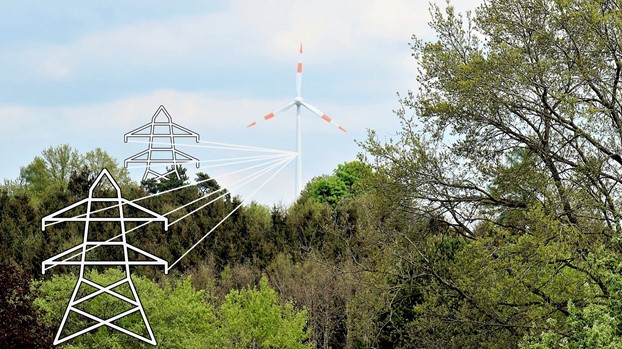 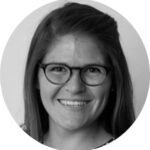 Paula Thimet is a doctoral researcher in the Group for Sustainability and Technology at ETH Zurich. Her research focuses on the role of storage systems to accelerate the decarbonization of electricity systems and is accompanied by the omnipresent question of “how do we reach net-zero?”.

Up until now, energy system modeling using bottom-up capacity expansion models has primarily focused on investigating cost-optimal transition pathways of national energy systems. Now that the transition is accelerating, it is time for this modeling community to start investigating the question of “How do we get to net zero?” by focusing more strongly on how policies can accelerate or impede the transition.

While the research community has been warning about the global climate crisis for decades and the newest IPCC report yet again outlined how dire the overall situation is, the political discussion is only slowly catching up to the imminent threat. This sluggish response of policy and decision makers, however, never stopped researchers from modeling energy systems with the hope of informing policy makers about possible ways to decarbonize the energy system and, as a consequence, nudging them to improve the political playground in favor of climate friendly options. Universities as well as independent research institutions have pumped out studies for years, each one using individual sets of data and assumptions, for example when it comes to costs of prominent renewable technologies, or presenting a new energy system model all together for the purpose of answering their specific research question.

The goal in most cases is: tell people in power how their decisions change the trajectory of the energy transition, how clean energy systems could look, and which technologies to support more than others to accelerate their diffusion. While providing this information is relevant and necessary, the question that I would like to pose is: Do researchers need all those optimization models? And even more importantly: Are they useful to current policy making?

Do researchers need all those optimization models?

I would argue that developing new optimization models specifically geared towards answering specific research questions is justifiable, but research should aim to expand on existing tools rather than developing similar models yet again.

The majority of novel energy system models improve on existing modeling approaches, for example, by developing a method to better approximate the operation of seasonal storage technologies. While adding new modeling tools to the already large database of open source models allows the research community to provide even more tailored answers to critical research questions, the continuous addition of new models has downsides, of which I would like to address two.

First, a significant amount of time and effort has to be put into the development of a new optimization model. In many cases, though, the added value created by the new tool is only incremental as a large portion of the models cover overlapping, if not even identical, functionalities. Second, explanations on the model formulation and data quality of new modeling tools is often intransparent and requires a thorough examination of the code and other related information to obtain an understanding of how the new tool answers the particular research question it was aimed at answering.

To tackle these challenges, modeling initiatives and platforms are developing to help researchers understand the capabilities of the readily available models and to improve access to new modeling additions. One example is the OpenMod Initiative, a community that hosts a database for most open source energy system models available and presents their key functionalities, allowing researchers to search for and compare models more easily. It further offers a multitude of resources on input data and modeling approaches. Other initiatives, such as the Nexus-e project take it upon themselves to combine the models into one large platform. Its aim is to use the synergies between all available models to create a powerful framework that is readily accessible for everyone and more versatile than each of its individual parts.

Those initiatives show that, while we might not necessarily need every single model that is being developed, expanding existing energy system models helps us investigate even more nuanced and complex research questions by pooling together the collective modeling knowledge already available. By combining and expanding existing research, we can make the resulting research more precise and valuable for our target audience – policy and decision makers.

In our review on electricity system modeling studies of Switzerland, Germany, France, and Italy, my co-author Georgios Mavromatidis and I concluded that a majority of study results can be seen as outdated only one or two years after their publication when considering the policies considered in the studies.

To give an example: In the majority of the studies renewable energy targets are not represented or significantly less ambitious than what current governments propose. Often, fully renewable energy generation is omitted as a goal for the future entirely, as Figure 1 shows for studies on the Swiss electricity transition. 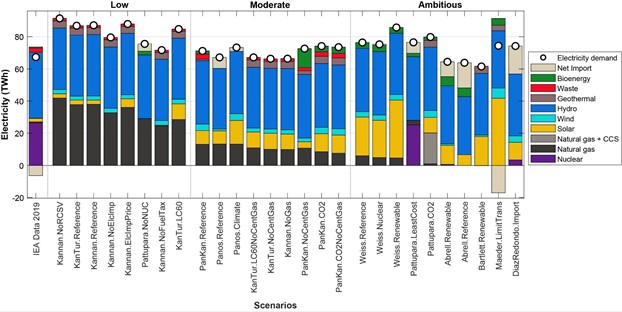 Figure 1: Comparison of Swiss electricity generation mixes for 2050 across different transition scenarios, taken from Thimet and Mavromatidis (2022). The bars are sorted by the share of renewable energy in the production mix, from low (left) to ambitious (right).

There are two issues hidden within the claim that studies become outdated too soon. First, many studies only discuss how a policy decision that is already in place would impact the energy system compared to the current system status quo. In some cases, additional scenarios discuss how a variation of costs changes the outcome of the model. Although a techno-economic discussion of the current status-quo is helpful, repeatedly investigating the same scenarios (cost-optimal baseline and climate target) in each new study offers little additional insights to policy and decision makers.

This leads me to my second critique point: the lack of imagination in the studied scenarios. As Dr. Marius Schwarz elaborated in his blog entry, modeling can support policy and decision makers in forming opinions based on scientific analyses rather than on subjective impression. This, however, is only possible if energy system modeling is used to investigate different policy mixes and their implications for the energy system transition before they are put in place.

By adding new, innovative and sometimes even outright bold policy suggestions (e.g. obligations for country-wide building retrofits or even high cost reductions for load shifting and shedding by TSOs) in the scenarios, policy and decision makers would gain a better understanding of what options they have to realize the energy system transition and can choose a combination of options that best suit the public discourse.

What might the energy system modeling community do next?

There is a mountain of review papers (1, 2, 3, 4, 5 to name just a few) available that clearly outline all the areas energy system modeling should work on from a more technical perspective. In addition to these important points I urge modelers to:

Adding a couple more models to our international modeling library can be useful. But we as researchers need to up our game and provide our target audience with novel insights on which policies would impact the energy transition in what way. I know we can offer the input needed to accelerate the energy transition, we might just have to be a bit more daring and creative than usual.

Cover photo by A. Thimet