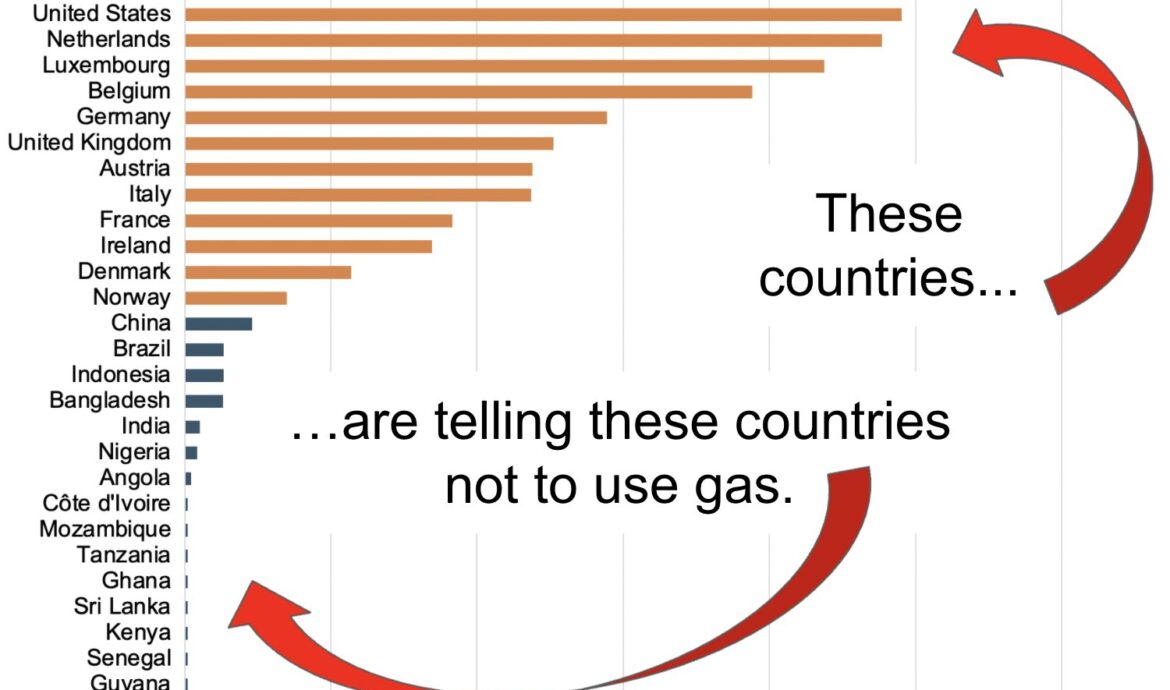 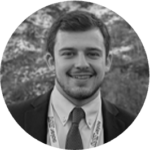 Jonah Messinger is a Visiting Scientist and ThinkSwiss Scholar at ETH Zürich, where he is investigating gammavoltaics, a novel clean firm power technology. Most recently, Jonah was a Generation Fellow at the Breakthrough Institute and a Research Associate at the Center on Global Energy Policy at Columbia University. He is a One Young World Ambassador, Co-Founder & CEO of Digest Energy LLC, a biogas project development firm, and Co-Founder & President of SolHomes, a nonprofit organization that recently built a net-zero energy home for Habitat for Humanity and led funding for an off-grid solar and storage system for a healthcare facility in rural Nepal. Jonah’s interests include clean energy innovation and sustainable energy for economic growth and development. His work has appeared in Advanced Energy Materials, ACS Energy Letters, Utility Dive, Light: Science & Applications – Nature, Last Week Tonight with John Oliver, and more.

By the end of the United Nations (UN) COP26 climate conference, almost forty nations and finance institutions, the vast majority of which are North American or European, agreed to ban public financing for international fossil fuel projects by 2022. Notably, the agreement neglected to apply such measures to the signatory countries themselves. If acted upon, this ban will likely hinder economic growth and cast doubt on aspirations for modernity in much of the developing world. This agreement pins the burden of decarbonization on the very nations least responsible for global warming and in most need of economic development.

The United Nations Framework Convention on Climate Change convened world leaders and national delegations for the 26th Conference of the Parties (COP26) climate conference in Glasgow, Scotland, during the first half of November 2021. Earlier in the year, seven European countries committed to ending state-backed financing for fossil fuels—including coal, oil, and natural gas—in other countries. It is notable that this ban encompasses all fossil fuel projects, in addition to coal, which is a relatively new development. By the end of the conference, 34 governments and five government-affiliated finance institutions agreed to ban public financing for international unabated fossil fuel projects by 2022.

The announcement was cheered by civil society organizations and environmental institutions as a demonstration of commitment to climate action. But, in general, these organizations fail to adequately value the UN’s eighth Sustainable Development Goal to “promote inclusive and sustainable economic growth.” Preventing countries in Sub-Saharan Africa and Southeast Asia from taking advantage of their fossil energy resources will make economic development a nearly impossible feat.

Historically, economic growth in wealthy nations has, in large measure, been fuelled by fossil energy. What’s more, economic growth and adaptive infrastructure development continue to be primary modalities for prospering in a warming world. While renewable energy will play an increasingly relevant role, why should economically developing nations be expected to only rely on renewable energy when such a standard is not applied to wealthy countries? That many of the signatory nations still intend to run their economies using natural gas for the foreseeable future is nothing short of hypocrisy. Indeed, during COP26, amid natural gas price spikes, the Financial Times reported that the U.K. held talks with Qatar to increase liquified natural gas imports. The U.K. has been a steadfast advocate for international fossil fuel finance bans, but it seems this standard does not apply at home. A U.K. spokesperson later disputed the report. Most importantly, anthropogenic climate change is driven by greenhouse gas (GHG) emissions stemming from the industrial revolution at the end of the 18th century. Low-income countries deserve to experience the benefits of their own industrial revolution. In this regard, wholesale decarbonization is the responsibility of wealthy nations, and global climate ambitions cannot stunt economic growth in emerging economies.

Further, these bans are likely to have far reaching detrimental financial impacts on emerging economies. Importantly, the terms of the fossil fuel investment ban include an obscure exception for fossil fuel projects “consistent with a 1.5°C warming limit,” as mentioned in the Paris Climate Agreement, which, ironically, also stipulates nationally differentiated climate action. The effect of this agreement remains unclear, but the outcome could be catastrophic. The signatories account for over 40% of the OECD’s export finance and at least $18 billion in annual international fossil fuel financing, or 10% of the G20’s $188 billion yearly total. To be fair, several low-income nations and finance institutions from the global south are among the agreement’s signatories. And while wealthy nations and members of the COP26 leadership team are quick to highlight this supposed diversity of supporters, the geographic trend of these countries is quite clear: they are mostly wealthy western European, northern European, or North American countries that are disproportionately responsible for climate change and continue to depend on fossil energy. John Murton, the British COP26 Envoy, celebrated the effort’s success on Twitter, posting a map of the signatories, seemingly not recognizing the mostly segregated picture it portrays. 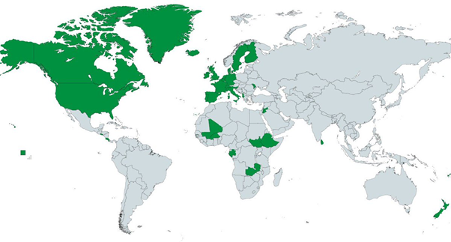 Figure 1: Map of signatory countries to the international unabated fossil fuel finance ban, showing a mostly geographic and economic dichotomy between wealthy fossil fuel powered countries in support and emerging economies that stand to lose the most. Source: John Murton

A mirage of climate action

The underlying message for the fossil fuel finance ban supporters is that these measures resemble a major step in climate action. But one should ask the question, what exactly are we decarbonizing? It is worth noting that the entire continent of Africa contributes less than 4% of annual global GHG emissions but is home to nearly 17% of the world population. And just over half the population of Sub-Saharan Africa has no access to electricity at all, with many having access to unreliable power. Similarly, India emits only 7% of yearly global GHG emissions, which will likely rise to be sure, but includes 18% of the world’s population. At COP26, India committed to net-zero by 2070, but because this timeframe didn’t fall in line with the mid-century consensus, western media organizations and their commentariat took the privilege of criticizing an objectively ambitious target. An often ignored metric, per capita carbon dioxide emissions from fossil energy and cement production in Sub-Saharan Africa, India, and other developing countries in the global south pale in comparison to that of their wealthier counterparts in the global north. Africa and India, together, have historically emitted only 6% of cumulative GHG emissions, whereas the European Union and the United States account for a combined 43%. Plotting historical GHG emissions on a map yields a spitting image of the fossil fuel finance ban signatories minus Russia, China, and a few others as can be seen in the figure below. 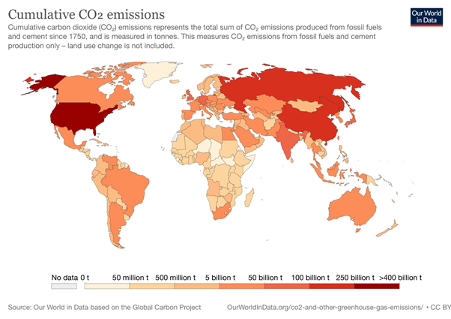 Figure 2: Map of national cumulative CO2 emissions from fossil fuels and cement production since 1750. Source: Our World in Data

Also let’s face it, expecting Sub-Saharan African and Southeast Asian countries to save the world from the potentially catastrophic warming caused by GHG emissions is not only unrealistic, but a nefarious claim that is not supported by evidence. A thought experiment by the Energy for Growth Hub, a nonprofit research organization, estimated that tripling the electricity consumption of every Sub-Saharan African (over 1 billion people in 49 countries) using only additional natural gas power would result in a mere 1.2% increase in global GHG emissions. If one performs the same analysis excluding South Africa, a relatively wealthy country, the increase is only 0.62%. In addition, a Center for Global Development analysis found that even in high economic growth scenarios with increasing GHG intensity of economic activity, emerging economies would still produce a significantly lower percentage of global GHG emissions than their percentage of the world population and compared to high-income countries, even with ambitious decarbonization initiatives. It seems that banning international fossil fuel finance with ill-defined or, in some cases, altogether absent exceptions for economically developing nations is not much of a climate solution at all. Instead, it is a fugazi climate effort that allows high per capita GHG emitters to continue consuming fossil energy while placing stumbling blocks for emerging economies to do the same.

The effective fossil energy ban for the developing world, along with already overdue and underwhelming public climate finance dollars and frameworks, will likely have deleterious consequences for economic growth and industrialization in the least developed countries. This is not an esoteric debate on ideal climate strategy. This is a moral qualm with the perverse notion that the solution to climate change includes limiting energy production and thus economic development in countries not responsible for essentially all historical GHGs in the atmosphere, yet most affected by the global warming of these legacy emissions.