Bobby McFerrin on Ted in a Pentatonic scale 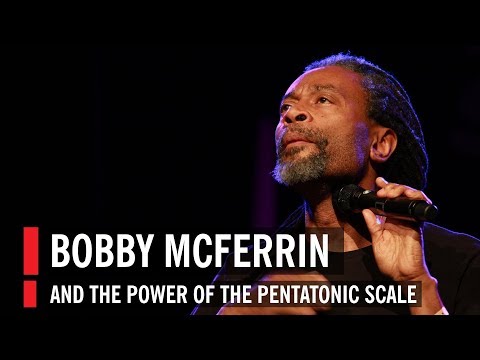 “There is something almost superhuman about the range and technique of Bobby McFerrin,” says Newsweek. “He sounds, by turns, like a blackbird, a Martian, an operatic soprano, a small child, and a bebop trumpet.” But despite the undeniable uniqueness of his gift, Bobby’s music is always accessible and inviting. When he invites his fans to sing along, as he almost always does, few can resist. Inclusiveness, play, and the universality of voices raised together in song are at the heart of Bobby’s art. Bobby McFerrin was exposed to a multitude of musical genres during his youth-°©‐-°©‐classical, R&B jazz, pop and world musics. “When you grow up with that hodgepodge of music, it just comes out. It was like growing up in a multilingual house,” he says. Bobby McFerrin continues to explore the musical universe, known and unknown. Drawing on all genres, demonstrating matchless improvisational skills, he never fails to dazzle. He never seems to run out of new ideas, and he loves having no clue what’s going to happen next. Ask him where he went to school, and he just might tell you that he is a graduate of MSU: Making Stuff Up. “Music for me,” McFerrin says, “is like a spiritual journey down into the depths of my soul. And I like to think we’re all on a journey into our souls. What’s down there? That’s why I do what I do.”

Listening to Bobby McFerrin sing may be hazardous to your preconceptions. Side effects may include unparalleled joy, a new perspective on creativity, rejection of the predictable, and a sudden, irreversible urge to lead a more spontaneous existence.