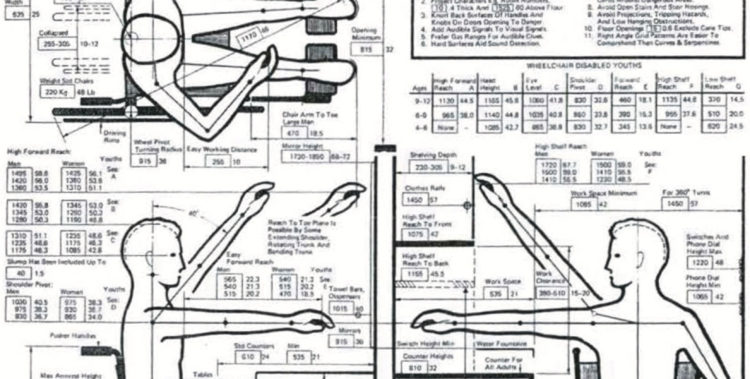 In today’s architecture practice it is self-evident to base our design on given norms, which build on a average user we can align on. As in the use of handbooks such as Ernst Neufert’s „Architects’ Data“ or DIN EN we are dealing with given templates of the inhabitants, specified with measurements of the body and their average behavior. By adapting these to our designs we, in a strangely unconscious way, perpetuate them into material and form. This will not only exclude a range of possible inhabitants, but also it will prescribe their behavior.

We as architects need to know our responsibility regarding this shift from average to prescription or from real to ideal and the consequences of it.

Aimi Hamraie, the author of „Normate Template: Knowing-Making the Architectural Inhabitant“ is critical towards this general notion that the world is designed with ‚normal’ inhabitants in mind. In her text she outlines the formation of norms throughout history supporting it with many examples. By being specific on architecture, the norms she talks about are on human bodies. As a writer and assistant professor of Medicine, Health and Society at Vanderbilt University in Nashville Tennessee she focuses her research on relationships between bodies and

built environments. Her interest is particularly on designing a social, anti-racist and disability justice- centered permaculture. It is also to mention that she earned her PhD from the department of women’s gender and sexuality studies at Emory University where she, amongst other things, got to train methods of empirical research, feminist theories of disability and technoscience.1

Her critic on the „Normate template“, which is a term for the critical complex notion that the world is designed with ‚normal‘ inhabitants in mind is based on the history and development of norms as tools for design. She starts with a quote from Elaine Ostroff to underline how designers, with their attitude on the normate template will limit their understanding and appreciation of diversity.

HISTORY OF THE „NORMATE TEMPLATE“

She argues that the pattern language of the normate template leads us back to antiquity. Vitruvius already claimed the human body as the template for beautiful architecture. Its beauty derives from the nature-given symmetrical harmony of its parts. The proportions were not only imagined, but materialized in classical architecture.

In the Renaissance it was Leonardo da Vinci who depicted the „Vitruvian Man“ not as a neutral body, but as a particular white, European, non disabled, youthful and masculine one.

In the 19. century positivists gained statistical data about the human body and its behaviors and began to treat architecture as a scientific discipline. They established their own standards and criticized the „Vitruvian Man“’s proportions as illusionary and untrue. New branches such as Positivist statisticians, physical anthropologists and early eugenicists came up and measured human populations with calipers and rulers for their statistical calculation. The phenomena of „normal“ and „average“ appeared with the birth of statistics to produce modern forms of power.

Its initial direct application was not for design, but for the new racial science which wanted evidence of the supposed degeneracy of nonwhite, disabled, poor and „feeble-minded“ people. With Gauss’ invention of the „bell curve“, which enabled demarcation between average and deviation or normate and misfit the description of the most statistically probable body became the prescription.

In the 20. century the geometric harmony and beauty based itself on the positivist science and emphasized an objective view of good design as premised upon the standardization of production and industrial efficiency. Le Corbusier wrote in 1923 „… All men have the same organism, the same functions. All men have the same needs.“ and introduced the „Modulor“ which conflated classical and scientific conceptions of the body. Although the body seems impartial, it seemed to conflate the ideal and the norm. This high level of rationalization

and science-based derivation made it an universal truth. The norm was still associated with a universal white, male, non disabled body. This had severe consequences for nonnormate inhabitants. In the US the overlapping demographics of people lead to discrimination and segregation. The normate template reinforced the effects of Jim Crow laws, immigration policies, gender discrimination and institutionalization. Eugenics set up „ugly laws“ wich prohibited people with atypical bodies from entering public space. By that the illusion of their nonexistence was created and resulted in less-accessible environments.

Through professional handbooks the standards of architecture got spread. Such as in Ernst Neufert’s „Architects Data“ they offered standard orthographic pictures of architectural elements. Although on the surface they seem translational, they referred to being based on „average or normal adults“. The scientificity shown as numbers had a persuasive function, lending architectural practice the appearance of standardization and order. The mathematical averages were not representatives of the existing, but merely calculations of a „mythic inhabitant“.

A turning point happened in 1981, when Henry Dreyfuss found a new way of knowing-making. By laying bare the messiness of knowing-making he animated the work of access-knowledge. His idea was to compile several independent researches, each thought for another practice, to reveal a sort of „evidence“. In his drawings there is a man and a woman depicted and there are several statistical numbers given for each part. The disabled inhabitant is depicted in a wheelchair, with cranes or crutches. These drawings joined the scientific efforts of industry, medicine and war in singular legible configurations.

With this came a change in thinking about the user. While modernists flattened human use and failed to address it, now it was all about designing with the user in mind. There should be multiple of uses for a single product. Dreyfuss underlined that he indeed gave averages, but that a design must fit not only the average, but also its large and small brothers. He had recognized that the charts were not used as he thought but misinterpreted as ideals.

The new data and diagrams on women, children, elders and wheelchair users were marketed towards industrial design, but began to cross the realm of architecture. In the early 1980ies finally legal requirements for accessible architectural design, particularly wheelchair users, had become enforceable in the design of federal buildings, increasing the urgency of a more inclusive knowledge base for architects.

Hamraies main argument in criticizing the „Normate Template“ is the misinterpretation of the average as an ideal or the shift to a prescription. The reason behind it is that architecture has to materialize at some point and by being based on statistical data on measurements of the human body, it gets only accessible for the average user it is designed for. The accessibility is therefore prescribing the inhabitant of a building.

She appeals for a design which is also accessible for the minorities such as people with disabilities.
In the text she is critical towards the notion that we base our design on statistical data, but she does not offer another solution. It becomes clear that she charges the architects such as Le Corbusier for creating the ideal of the white young and fit man and by that provoking segregation and discrimination. On one hand she criticizes positivism in disregarding minorities. On the other hand it were also positivists who collected data on wheelchair users. So she somehow is not very objective, but clearly on the side of the movement after 1981. This becomes also clear when we look at how she assigns Jim Crow laws or „ugly laws“ to the normate template, which have no direct link to these happenings.

In my opinion we have to be critical towards Norms by asking ourselves which parts of the populations are excluded in the drawings. This can reach from children to elderly to disabled people. We have to make efforts to make our designs accessible for all of us, providing a broad diversity and by that preventing segregation.

Every Norm drawing has its imperfections, even the ones from the SIA are limited on disabled people which are in public space and therefore mobile. There are no norms for disabled people who are not mobile and in need of help. So being rather careful and critical in using them is the only chance to somehow making the architecture accessible for everybody. There is no way around using the norms as guidelines, but we have to be careful to not see them as ideal, but as flexible and adaptable guidelines.