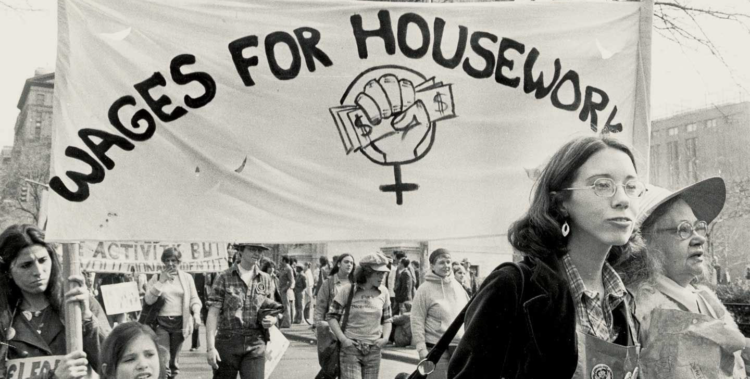 In 1975 Silvia Federici published a book called “Wages Against Housework“. This book deals with the issue of domestic work, analyzing it as consequence of the capitalism and as a women oppression. Federici is an activist and studious who has always worked in the field of feminism and gender studies. She recognizes herself as a Marxist feminist and precisely in the document for the foundation of the New York Committee of the International Women’s Collective (IFC) she and her colleagues describe themselves as follows:

“We identify ourselves as Marxist feminists and we take this to indicate a new definition of class, whose old definition has limited the scope and effectiveness of the traditional left and the new left.” This new definition is based on the subordination of the worker without work to the hired worker behind which is hidden the productivity, that is the exploitation, of the work of women in the house and the cause of their more intense exploitation outside of it.An such class analysis presupposes a new area of struggle, the subversion not only of the factory and the office, but of the community.”

(The factory in the family, The radical vision of household wages, by Sarah Jaffe)

The text “Wages Against Housework” opens with strong and particular words, which express a protest and a complaint against an oppressive situation.

“They say it’s love, let’s say it’s an unwanted job.
They call it frigidity. We call it absenteeism.
Every abortion is an accident at work.
Homosexuality and heterosexuality are both working conditions. . . but homosexuality is the control of production by workers, not the end of work.
More smiles? More money. Nothing will be so powerful in destroying the healing virtues of a smile.
Neurosis, suicides, desexualization: occupational diseases of the housewife. “

The text continues highlighting the differences between domestic work and the “real” work of a men.
Economic differences – the denial of a woman’s own capital, which leads her to be completely subjected economically by her man – and the physical differences that led to this situation. In fact, the woman becomes subject to a collective image according to which her real charge is to stay at home, do housework, and serve her man. This because of a “natural” necessity that leads the woman to want a housewife’s life. more than anything else in the world, as if this were

“a natural attribute of our female physique and personality, an internal need, an aspiration, supposedly coming from the depth of our female character”

This collective image is denounced by Federici, who uses the request of wage to make it clear that women are doing a “work” imposed on them and that they do not for a “natural need”.

This ideal is also found in Betty Friemann, “The feminine mystique”: according to which the woman is not even given the opportunity to make an identity because the man will allow her to “get rid of this search”, giving her the opportunity to be a mother and / or wife. Women are therefore victims of a false system of values that forces them to live the search for their identity only through their children and their husbands.

The money and the request of a wage become a way to match the two “jobs”. Then follows a comparison according to which: how a man is obliged to adapt to any type of work – even one that he does not like – to bring home money and keeping one’s family, in the same way a woman who does not like to be a housewife must receive a wage.

“And from the viewpoint of work we can ask not one wage but many wages, because we have been forced into many jobs at once. We are house- maids, prostitutes, nurses, shrinks; this is the essence of the ‘heroic’ spouse who is celebrated on ‘Mother’s Day’.”

Federici attributes the blame for this situation to capitalism. An economic-social system that recognizes as work only what is repaid with money, without giving any value to what is not paid. “It is important to recognize that when we speak of housework we are not speaking of a job as other jobs, but we are speaking of one of the most pervasive manipulations, most subtle and mystified forms of violence that capitalism has perpetrated against any section of the working class.”

In this way the woman is the one who must be in the service of her husband – the one who “really works” and therefore has reason to be tired – while she, after spending a day doing housewife has no excuse for not being smiling.

“This is why to be called a female is such a putdown, such a degrading thing. (“Smile, honey, what’s the matter with you?” is something every man feels entitled to ask you, whether he is your husband, or the man who takes your ticket on a train, or your boss at work.)”
(Revolution at Point Zero. Housework, Reproduction and Feminist Struggle (Brooklyn: Common Notions, 2012), p.18)

The book by Federici is very strong, in some situations describes the woman as someone who has had to accept “particular form of prostitution of body and mind” or even be seen as “nagging bitches”, she deals also with important topics such as love, writing very frankly “Many of us still have the illusions that we marry for love”. (Revolution at Point Zero. Housework, Reproduction and Feminist Struggle (Brooklyn: Common Notions, 2012), pp.15-22)

Precisely for this language in certain situations we found ourselves a bit ‘far from what is written. Almost as if using these terms was a forcing, as if in reality there is no need. Despite this, however, the language has its own reason, it is used in a period of non-equality between women and men and the need to be heard exceeds good manners.

We, here, live in a reality that allows us not to always have to shout to make ourselves heard and therefore read texts like this could in some situations seem a forcing.

We are still in agreement with what Federici denounces – in its own way – also because our families come from realities that are still very different from those we find living in Switzerland. One of us is from Russia and the other from Macedonia. We still find ourselves today in front of daunting situations, situations in which women are still very subjugated by man and are used as “servants” precisely because they do not have the possibility to create themselves an identity. We are therefore a bit ‘perplexed to reflect on some situations that actually if lived can lead the woman to be diminished by the simple fact that was born woman and did not have the opportunity to create a life of hers own. In our countries of origin, even today, women can not decide who they want to marry, because it is the man who decides.

In conclusion, we feel we can say that we can not deny anything that Federici has written, which, however raw and not delicate, tells of a situation that is still present today and needs to be changed.