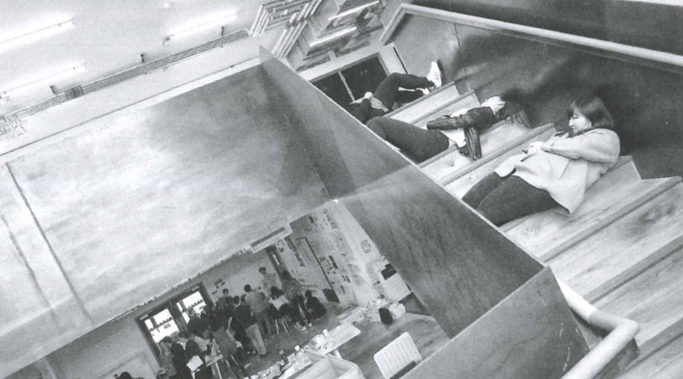 by Nora Molari and Bing Yang

Catharina Gabrielsson is an architect, critic and writer. She is assistant professor in urban theory at the School of Architecture KTH and Director of the doctoral programme Art, Technology and Design in collaboration with Konstfack. With an emphasis on creative academic writing, her research investigates the interface between architecture and the city in conceptual and material terms, frequently employing fieldwork to address concerns in cultural geography, philosophy and aesthetics. She is an editorial member of the research journal Architecture and Culture (Taylor & Francis), Architecture, and Fellow at The Swedish Research Institute of Istanbul.[i]

In her work “The Critical Potential of Housework”, Gabrielsson discusses the very definition of what architecture is. Or rather, what we think it is and what it actually should be taking into account, namely those practices that tend to be hidden away as something that should not be shown – housework. There we have on the one hand the pure, distant and abstract practice of the architect, on the other the dirty, intimate and concrete labor of housework. Gabrielsson emphasizes the necessity of confronting this separation and “raising housework to a level of critical awareness – paying attention to it.”

The two spheres referred to broadly as the private and the public, inside and outside, the suburb and the city. Two spheres mainly characterized by the fact that one is understood as being based on the capitalist system of payed work, the other as being somewhat “other” to the market hence not part of the capitalist system and the labor it induces stays unpaid. It is work and housework, it is men’s work and women’s (house)work.

Gabrielsson contests this separation of spheres in relating them back to architecture and maintenance or to be more precise: maintaining architecture.

To do so she redraws the problematic by cross-readings of the central critical arguments brought forward on the topic by feminist theorists like Nancy Fraser or the artist Mierle Laderman Ukeles.

Gabrielsson bases her text on Frasers radical critique of capitalism underlining that the later actually depends on unpaid labor like housework to function.

“The multitude of crises in capitalist societies cannot be explained by reference to contradictions inside capitalism but in relation to the resources it exploits; its dependence on co-existing ‘non-economic’ realms that supply what Fraser calls its ‘background conditions of possibility’.

She also states that “the recognition that wage-labor could not exist in the absence of house work has sustained generations of feminist struggles.”

Gabrielsson goes on to explain “how the socioeconomic process that shaped the home as separated from the workplace also imbued it with ‘subjective’ values, giving rise to the 19th century cult of the home as a refuge for all that was threatened by extinction in modernity” and comes to the conclusion that “the imaginaries of home can thus be seen as formed through a process of ‘splitting off’ values from the world of industry and commerce: not as a resistance to capitalism but as inherently structured by it.”

It is this interdependence between the supposedly different spheres that Gabrielsson uses as an argument to link this discussion to architecture. Not only are these environments deeply implicated by architecture, as architecturally designed, structured and maintained, but the imaginaries are the same: Work is seen as the important part, housework is the stuff you do afterhours, not worth to be mentioned, not representative. Architecture tends to be looked at in a similar way: the architects work is reduced to the ‘creative work’ starting with the design process and ending with the inauguration of the building. Maintaining the building once it is built is something we only rarely talk about and if so, with only little interest. Moreover, we make a distinction between maintaining a building and cleaning it, again under the stereotypical imaginaries that one is public, and one is domestic, therefore private and individual and hence not worth mentioning. But as Fraser puts it “no society that systematically undermines social reproduction can endure for long” and just as simple as that no building will endure if it is not cleaned and maintained.

Thus Gabrielsson draws the conclusion that “housework carries a potential to go beyond this narrow conception of architecture (…) We must understand both maintenance and cleaning as care-taking practices engaged with buildings (…) Housework calls on a wider assemblage of relations, activities, spaces and temporalities that, although hidden and ignored in architecture, constitute its background condition of possibility.”

And so “housework is not ‘other’ to architecture, but provides the basis for its ‘art’.

Gabrielsson’s focus on housework inspired me to reflect upon the relationship between the Work of Representation and the Everyday Life.

Taking into account what has been regarded as trivial has long taken part in the study of history. In order to better understand such stance, I would like to take a look at the Microhistory.

Carlo Ginsburg, one of the representatives of this trend, believes that the modernization “has unleashed not only immense productive forces but also devastating destructive energies that are inseparably linked with them. Moreover, it has taken place, so to say, behind the backs of people, primarily ‘little people,’ who had been neglected as much in social science-oriented history as they had been in the conventional political history that focused on the high and mighty.”[ii]

The way the architecture discipline looks upon itself is in dire need to be updated. On the one hand, we have sociologists talking about labor, politics, economics, on the other hand, we have architects discussing aesthetic and ideology. There is a clear gap between the work of representation, the high and mighty, and its social context, its “reality“.

The work of representation in a broader sense is a powerful tool to construct identities. In the case of architectural world, the architects are generally regarded as “the Renaissance man“, the one who distant himself from the repetitive labor, whose work can be regarded as “Work“ in Arendt’s sense.

According to Arendt’s definition, “labor” is human activity directed at meeting biological (and perhaps other) necessities for self-preservation and the reproduction of the species. Because these needs cannot be satisfied once and for all, labor never really reaches an end. Its fruits do not last long; they are quickly consumed, and more must always be produced. Labor is thus a cyclical, repeated process that carries with it a sense of futility. In the ancient world, Arendt asserts, labor was contemptible not because it was what slaves did; rather, slaves were contemptible because they performed labor, a futile but necessary activity.

Work, unlike labor, has a clearly defined beginning and end. It leaves behind a durable object, such as a tool, rather than an object for consumption. These durable objects become part of the world we live in. Work involves an element of violation or violence in which the worker interrupts nature in order to obtain and shape raw materials.[iii]

Such position is problematic in two ways: 1) regarding the inauguration ceremony as the final goal of the architectural production; 2) neglecting the actual design process in today’s circumstances.

So how does the architectural industry operate today? In Switzerland, the whole process of building is divided into 6 phases: 1) strategic planning; 2) Vor-study; 3) project planning; 4) Invitation of tenders; 5) Realization; 6) Management. [iv]The architects mainly take part in the phase 3-5, part of the building cycle, not to mention some major work during realization is allocated to construction company.

One might argue that this is the industrial world and we should focus mainly in design itself. So what does it mean to design today? In her interview of engineers, metal and glass fabricators, steel and aluminum factory workers, architects, and software developers, Peggy Deamer came to a conclusion that building work is no longer linearly handed down from architects to staff, to contractor, to subcontractor, and that new software supporting building information modeling (BIM) and new contracts allowing Integrated Project Delivery (IPD) are allowing revolution in the discipline. [v]

Or so to say the discipline is facing another “Crisis” (again). A simple question such as “who is taking care of your building” allows us to reexamine some very naïve, unconscious assumptions lurking behind. Of course there is great art in architecture, of course aesthetic plays an important role, however, the work should not be attributed to one man only, the aura of architecture is not the result of “Genius”, an temporal, mysterious power.[1]Taking housework and labor into architectural discourses provides assistance to demystify the chain-of-command narrative, to empower individuals involved, to enable a dignified life, which is what architecture should have done.

[v]Nochlin, Linda (1971). “Why Are There No Great Women Artists?”. In Gornick, Vivian; Moran, Barbara.Woman in Sexist Society: Studies in Power and Powerlessness. New York: Basic Books.