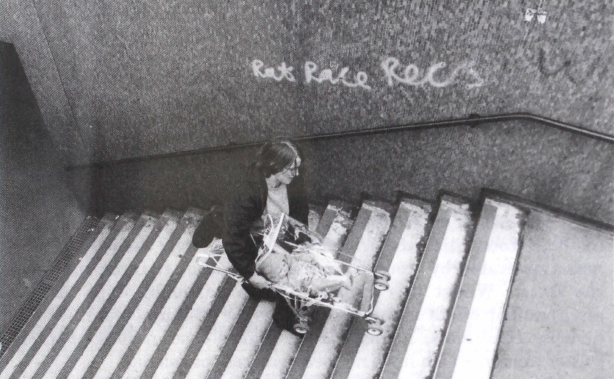 The members included Jos Boys, Frances Bradshaw, Jane Darke, Benedicte Foo, Sue Francis, Barbara McFarlane and Marion Roberts, who all have been trained conventionally by and with men, who often devalued or ignored their work, describing it as “emotional” or “confused”. In order to revalue their ideas and feelings, they always tried to do work together, to give talks in pairs and to discuss work in progress with a larger group. The practice was run as a workers’ cooperative with a non-hierarchical management structure. Their intention was to work together as women to develop a feminist approach to design through practical projects and theoretical analysis, but they also explored the relationship of women to the architectural profession. Book “Making Space – Women and the Man Made Environment” by Matrix

One of their fundamental guiding principles is the idea that “because women are brought up differently in our society, we have different experiences and needs in relation to the built environment” They argue that building design and research starts from personal concerns, from an awareness that the man-made surroundings are not neutral, that there is a contradiction between the lived experience of many women and the particular physical patterns that the built environment make.

They acknowledge the fact that there might be a contradiction between the needs and desires of many women now and in longer term aims. They for example argued for more childcare facilities now to ease the burden on women of looking after children. But this doesn’t mean that women should be solely responsible for children. They looked in the long run to a more equal concern between women and men for looking after children.

“The whole process of designing and getting a building built is conventionally described as only a technical process. The ideology underlying how information is organized, whom you listen to, what questions you ask, which parts of the process could be open to group involvement- these are not generally discussed by architects or by those who employ them.” (p. 101 in Making Space – Women and the Man Made Environment)

During the late 1970s and early 1980s in Britain, governmental funding was available for voluntary organisations in form of technical aid, which could be used for advice on design issues. Matrix was operating as a Community Technical Aid Centre and their projects were all publicly funded social projects and technical advice. This fact helped them to challenge the architects’ ways of working in order to make the design process more understandable and engaging for clients and users. Hence they were questioning the conventional hierarchy between the client, the architect and the builder. They describe the conventional relationship as hierarchical and formed by differences in class, status and decision-making. The client is usually male or a group of males, the architect is often a men from a middle class background and the builders are male too. If everybody is male, they can overcome the tension due to differences in class and status through “male camaraderie”. If the architect is female this mechanism is not working. Women architects are in an authoritative role, which class differences reinforce, yet as women they do not normally have authority over men. Thus they are isolated by sex and class.

Matrix tried to equalize this hierarchy. They were working with female builders to overcome the isolation by sex. But the relationship between builders and architect was still difficult when one is working in a conventional framework, “as it is a direct conflict with the expectations of working in a sisterly way, that is, supportively and co-operatively.” To break down the status differences between design and building work they argued the necessity of understanding and relating to others’ skills. This is why some members of Matrix learnt building skills. Further the architects’ skills must be demystified and made accessible to not stay invisible. Thus they were working in “design-build-cooperatives”, which required more time and therefore money.

This means a change of role of the architect. The architect should help the users to realize their own needs and help to express them, rather than imposing ideas and offering ready-made designs. Therefore in their projects, they attempted to develop participatory design methods that value women’s involvement in all stages of the evolution of a building – from recognizing the need of a building until its final use.

They noticed that the tools architects use, like drawings, models and even the way architects talk, were too abstract and incomprehensible for non-professionals. Instead of abstract and technical plans, they for example used scrap paper and unruled lines. They wanted to overcome the feeling that once something was drawn it could not be changed and that the group could get a feel of manipulating the spaces and take an active part in the process of designing. Or they used pieces of paper for furniture, walls and windows and everybody could move the bits of paper around trying out different arrangements and seeing how big things were in relation to each other. They made models in which all the parts of the building that could not be changed were fixed and all the rest could be moved around. The relative size and position of spaces could be judged and women could immediately show what they meant when suggesting how the space could be used. In one project they let the builders draw the visualizations. The drawings did not use complicated techniques and so were very immediate. With that they wanted to challenge the idea that only designers can imagine what spaces will be like. Matrix also ran a short course for the women who were to be particularly responsible for making design decisions. For instance, the women measured the room they were in and drew it to get an idea of how scale drawings relate to real spaces. The Stockwell Health Centre group asked Matrix for advice, after they realized that the plans made by the local authority architect didn’t meet their expectations. They saw that the type of building would strongly influence the possibility of implementing their ideas like enabling the community to have control of the building, fulfilling the needs as a resource and that the building should feel open and easy to use. After various discussions with different groups and at public meetings, the final design was L-shaped, with a café/meeting place in the corner, and crèche and community health worker’s office behind. The creche opened onto the garden enclosed by the ‘L’. One arm of the ‘L’ along the existing main street housed the ‘drop-in’ facilities where people could get information and the services related to health care. The other arm was to contain the more private offices and consulting rooms. The cafe and related spaces were intended for use in the evening as a more general community resource.

It was never actually built although some suggestions were incorporated into the local authority designed building. The job of Matrix was to discover with the group how a health centre could be designed, and to help the group convince the Area Health Authority that the community’s ideas were realizable. The Lambeth Women’s Workshop is a carpentry and joinery teaching workshop in South London. It runs beginners’ courses aimed especially at women with children, black, and working-class women. It was organized, designed, and converted by women, and was run by women then. They chose a unit in a large industrial building that was already weatherproof, with natural lightning and lifts for bringing up materials. But it had an inhospitable atmosphere. So the space was broken into more intimate areas by, for instance, raising the floor of the sitting and kitchen space to give low window sills and ceiling height.

The entrance to the Lambeth Women’s Workshop is an informal space, which includes a sitting area, a kitchen, and an office. Each area is distinct but not separated by walls. The group did not want the workshop space to be completely cut off, but it is noisy and has potentially dangerous machinery in it. Therefor two large windows allow you to see who is in the workshop and watch what they are doing. Without getting in the way, women who are new to the workshop can get a feel of the work that goes on there. Comparison of the temporary and permanent premises

The Dalston Children’s Centre was set up by a group of women in Hackney, North London, and provides facilities for women and children which are not normally available. The centre had been housed in various temporary premises for three years. Matrix was involved both in making the present temporary premises usable and in finding permanent premises and doing the architectural work necessary. The building that was their permanent premises is an old bath-house that had to be changed into a children’s centre. They created a comfortable and friendly atmosphere in the large and cold spaces of the bath-house.